Here’s an opportunity to reach a far larger audience, for a small investment.

Is this how freedom ends? Not with a bang or a whimper, or thunderous applause, but with the slow creep of political corruption.

First some background: As you all know, I’ve been duking it out recently with the Race Grievance Industry. I’ve made the point that, overall at least, the cops aren’t racist, and the incidents that have recently taken place — the Michael Brown, Eric Garner and other incidents — do not support the case that the cops are racist.

Some surely are, but there is no indication that there are more racists in the police force than there are in the general public, where racism — at least among white Americans — is increasingly rare.

I should clarify a bit. I’m no automatic fan of the police. Yes, I’m grateful for the efforts of the very many great cops out there, but it has to be admitted that there are some bad ones. And these bad ones will sometimes just “follow orders,” as, apparently, they did in Wisconsin.

I’m referring to this.

I am usually an easy going guy and can honestly
say that I haven’t been mad since Christ rode a
bicycle, but I do have a few things that stick in
my craw.

Recently I’ve noticed the practice of using the
American flag as a doormat at protests while saying
this is the right of the protestors. Here’s the
real deal: putting our flag on the ground, or
floor, is a crime punishable by fine and up to 1
year in jail.

If a veteran, patriot, or other proud American
calls you on this fact they are not being racist.
YOU are being unAmerican. The same goes if they
remove your flag from the ground.

Veterans, patriots, or other proud Americans who
fly the American flag at home should never have to
take the flag down. If it offends you and you use
your right to protest we have no…

~~Defender of Faith~Guardian of Truth~~ 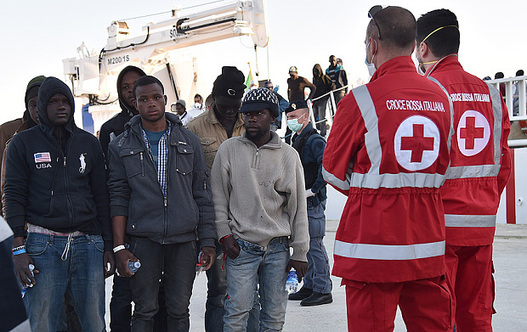 A dozen Christian asylum seekers drowned in the Mediterranean after they were thrown overboard by Muslim migrants in a furious row fueled by “religious hatred” on a smuggler boat sailing from Libya to Italy.
Italian police last night were investigating the deaths, which emerged from testimony provided by the 100 other asylum seekers on board the vessel. The boat was rescued by Italian ships and brought to Palermo in Sicily.

Fifteen Muslim migrants, believed to be from Senegal, Ivory Coast,and Mali, were arrested, accused of having thrown the Christians from Ghana and Nigeria into the sea after the fight broke out.

They are suspected of being responsible for “multiple aggravated murders, motivated by religious hatred”, police said.
“The threats then materialised and 12 people, all Nigerian and Ghanaian, are believed to have drowned in the Mediterranean,” they said.
The attackers were identified by other refugees, some of whom were in…

tell me this is not true